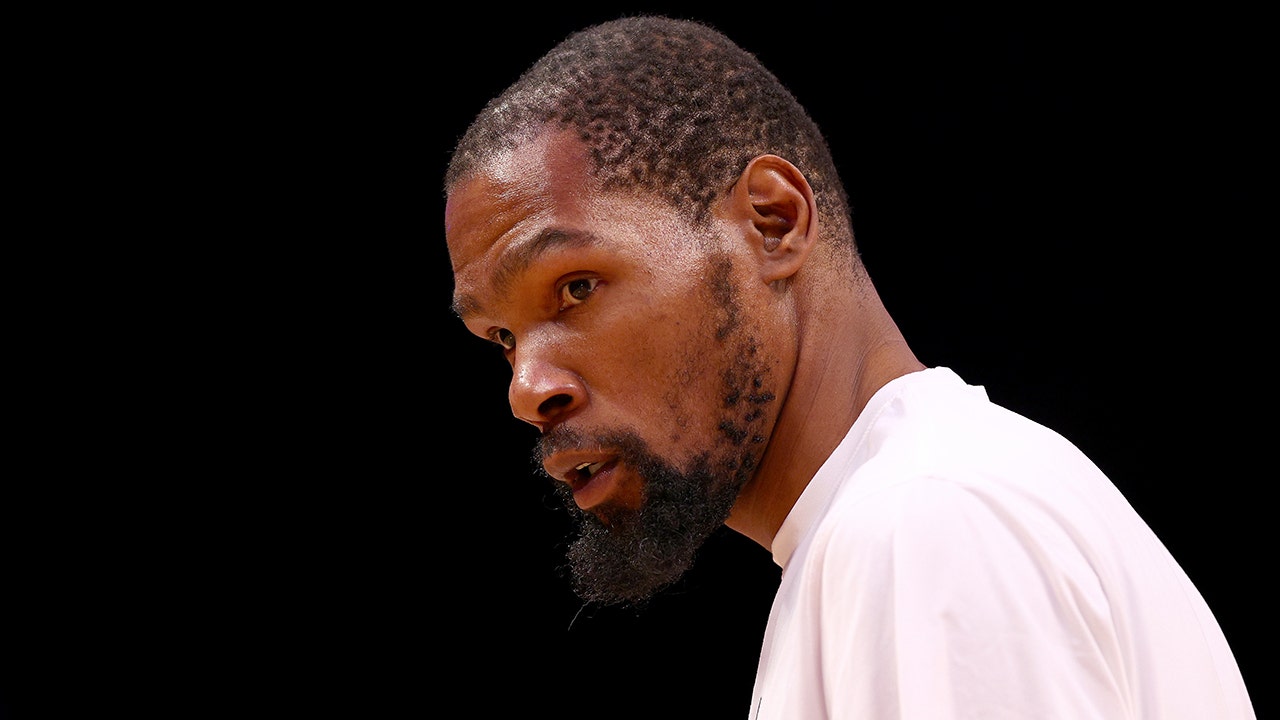 Kevin Durant’s future with the Brooklyn Nets has been in question since Kyrie Irving trade rumors have gained steam over the last month.

Irving may opt out of his current deal with the Nets or opt in so Brooklyn could swing a sign-and-trade deal.

Irving and Durant both signed with the Nets before the 2019-20 season, and the latter signed a contract extension in August 2021.

Kyrie Irving (11) and Kevin Durant (7) of the Brooklyn Nets during the first quarter of Game 1 of the 2022 NBA Eastern Conference first round playoffs against the Boston Celtics at TD Garden April 17, 2022, in Boston.
(Maddie Meyer/Getty Images)

With Durant’s name floating in the rumor mill, a doctored image of him and Portland Trail Blazers star Damian Lillard emerged on social media — both of them wearing the red and black.

On Friday, Durant opened up about the Irving situation a bit and said he won’t be getting involved.

Kevin Durant (7) of the United States talks with Damian Lillard (6) during a men’s basketball semifinal between the United States and Australia at the Tokyo 2020 Olympic Games in Saitama, Japan, Aug. 5, 2021.
(Meng Yongmin/Xinhua via Getty Images)

“There’s no involvement at all. I mean, I can’t be involved with … this is this man’s livelihood, you know?” Durant told “The ETCs” podcast. “This is much bigger than me. Being a free agent is one of the most important times in your career. That can’t be swayed by anybody else. I just do me and wait for the time.

Kevin Durant of the Brooklyn Nets warms up before Game 4 of the Eastern Conference first round playoffs against the Boston Celtics at Barclays Center April 25, 2022, in Brooklyn.
(Elsa/Getty Images)

Ryan Gaydos is the sports editor for Fox News and Fox Business. Story tips can be sent to Ryan.Gaydos@fox.com.

On this day in history, August 11, 1934, America’s most notorious prisoners arrive at Alcatraz